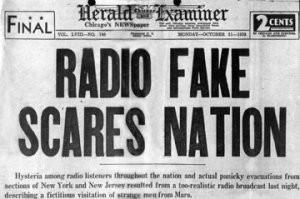 I first heard the original War of the Worlds broadcast in Sister Barbara Jean’s 8th grade reading class. The first ten minutes or so gave me goose bumps and sparked my love of old time radio. It made such an impression on me that I set my first mystery, The Darkness Knows, in October 1938 to coincide with the original Mercury Theatre of the Air broadcast on October 30, 1938 (a character is actually listening to the live broadcast near the end of the book).

Do yourself a favor and listen to the original (It’s brilliant and so far ahead of its time.): Orson Welles Mercury Theater of the Air broadcast on YouTube

One of my current favorite radio shows, Radiolab, did a fascinating episode around the psychology of the broadcast – why it worked so well and what happened when it was repeated: Radiolab War of the Worlds Live Episode