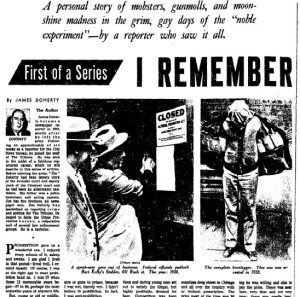 How could a mystery series that takes place in 1930s Chicago not at least make one reference (or ten) to that town’s infamous reputation from Prohibition? Prohibition and you-know-who* do come into play in Book #2 of the Viv and Charlie Mystery Series, and as usual, I found myself spending a lot of time trolling the archives of The Chicago Tribune for research.

I ran across a series of retrospective articles that ran in early 1951 written by veteran reporter Jim Doherty**. He was a reporter with The Tribune during Prohibition, and in 1951 was reminiscing about events only about 20 years in the past for him. That’s a veritable gold mine for a historical fiction author (or just a history nerd that enjoys squinting at old newspapers, like myself). I thought I’d share them here, because these articles don’t seem to exist in a collected form (or anywhere else for that matter). 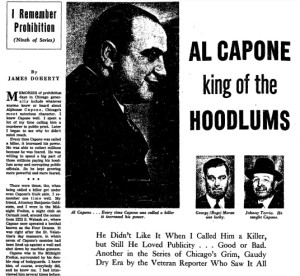 **About the Author – From the very first article in the series (Feb 4, 1951)
James Doherty became a newspaper reporter in 1919, shortly after he left the army. Following an apprenticeship of six weeks as a reporter for the City News bureau, he joined the staff of The Tribune. He was soon in the midst of a fabulous reportorial career, which he will describe in this series of articles. Before entering the army, “Jim” Doherty had been deputy clerk of the Juvenile court and deputy clerk of the Criminal court and he had been an aldermanic candidate. His father was a police lieutenant and acting captain. Jim has five brothers, all newspapermen. Jim Doherty has specialized on reporting crime and politics for The Tribune. He helped to form the Crime Prevention bureau, a cooperative unit of several law enforcement group. He is a bachelor.
(He died in 1961.)