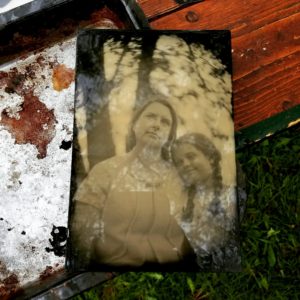 Maybe it’s not fair to call it a bucket list – since I don’t have an actual list – but I know an opportunity when I see it. Old World Wisconsin is one of my all-time favorite places. I think this stems from my early (and often) exposure to Little House on the Prairie as a child – both the TV show and the books. It’s a living museum and it really is like walking into the books. If they offered overnight immersion experiences on one of the farms I’d jump on that in a second. Anyway, I happened to see that they were going to have tin type portraits available on Mother’s Day and how could I turn something like that down? 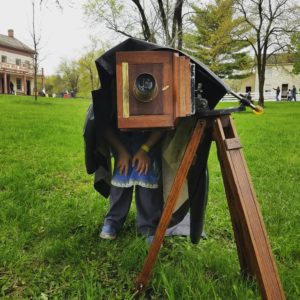 The day was overcast – perfect for taking photos outside. The session was with David Rambow from the H.H. Bennett Studio (in the Wisconsin Dells). He said he learned the craft in pre-internet days by going to the woods of New York and living with a hermit for a week. I think he was semi-serious (serious about how he learned the skill – not so serious about the hermit bit, but who knows). He built the camera using a lens from the 1850s and also a portable dark room for developing purposes. I didn’t know the process was so quick – a matter of 20 seconds to develop. Watch the magic below:

He said our pose (all Kate’s idea, by the way) reminded him this Civil War photo of a Southern spy and her daughter. 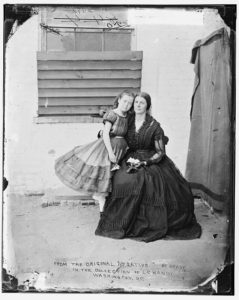 I can see why he’d say that – especially Kate’s hair and expression. Rose Greenhow’s (and daughter Rose Greenhow) photo was staged for the newspapers, but imagine wearing that dress in a prison! How uncomfortable. It hurts my ribs just to look at it.

It really was a magical experience. Next time maybe I’ll come in costume and then compare to this photo of my great-great grandparents who (I think) came to the US on their honeymoon (my great-grandmother, Anna, is the little blurry one).  My best guess at the date of this photo is 1871 or 72 since my great-great-grandmother was born in 1869 and she seems about 2 or 3 years old here (?). Not old enough to hold still anyway. 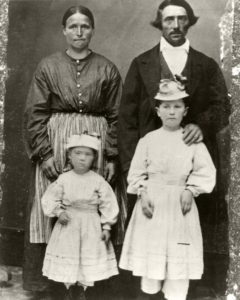 Oddly enough, there was a PBS segment about a tintype portraitist in Milwaukee very recently that also shows the process. I’m tempted to set up a session with her. The photos produced are lovely and imperfect – and there’s something gorgeous in that imperfection.