Radio star Vivian Witchell has finally mustered up the courage to invite her long-time love interest, Charlie, to meet her family at their luxurious cottage on Geneva Lake. But the visit goes terribly wrong when an old flame of Vivian’s turns up dead–and it looks like Charlie might be the culprit. Set in the glittering world of the 1930s Chicago radio scene, Vivian is locked in a race against the clock to solve the murder and save the man she loves before she loses him forever. 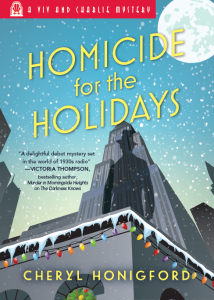 e Mystery Series, HOMICIDE FOR THE HOLIDAYS, is available now.

A hidden key that opens a drawer locked for the past eight years, a mysterious envelope filled with cash, and a threatening note… none of this is what rising radio star Vivian Witchell expects to find in her late father’s office. But when Vivian stumbles into trouble, she hardly knows how steer herself back to safety. With the handsome and maddeningly practical private detective Charlie Haverman at her side, Vivian spends the holiday season uncovering the details of the last weeks of her father’s life, following a sinister trail of clues that leads her directly to one of the most notorious mob bosses of all time, Al Capone.

The second book in the acclaimed Viv and Charlie mystery series, Homicide for the Holidays is a riveting holiday mystery set alternately amidst the glitz of Chicago’s radio drama scene and the grime of its taverns and speakeasies.

“The second book in this series is even better than the first! Vivian’s quest to uncover her family’s darkest secrets will keep you turning pages long into the night. The 1930s come to vivid life in this period mystery that is rich in detail and chock full of questionable characters.” – Victoria Thompson, Bestselling author of MURDER IN THE BOWERY

“Cheryl Honigford brings 1930s Chicago to life in this delicious tale of hidden secrets and courage in the face of the unknown. A perfect holiday mystery!” – Tasha Alexander, NYT bestselling author of THE COUNTERFEIT HEIRESS

“With its cast of colorful characters, this captivating second entry in this historical series (after The Darkness Knows) will please aficionados of the period…” – Library Journal

“Honigford nails the time period, painting a delightful picture of 1930’s radio life, and the weekly dramas that were so popular at the time. Down to the ad men and the station contrived romances, Honigford sweeps the reader into a by-gone era of radio stars and glitz—as well as the underbelly of Chicago with its criminal element and former speakeasies. This installment of the series also has a lovely Christmas flavor—with the scurry of holiday shopping, Christmas trees and frosty fingers and toes.”
– River Heights Book Review 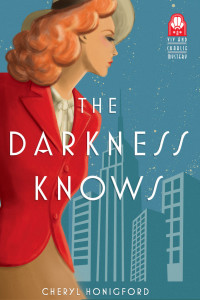 Book #1 in the Viv & Charlie Mystery Series, THE DARKNESS KNOWS, is available now.

Chicago, 1938. Late one night before the ten o’clock show, the body of a prominent radio actress is found dead in the station’s lounge. All the evidence points to murder…and one young, up-and-coming radio actress, Vivian Witchell, as the next victim. But Viv isn’t the type to leave her fate in the hands of others—she’s used to stealing the show. Alongside charming private detective Charlie Haverman, Vivian is thrust into a world of clues and motives, suspects and secrets. And with so much on the line, Viv finds her detective work doesn’t end when the “On-Air” lights go out…

The gripping first novel in a new series from debut author Cheryl Honigford, The Darkness Knows is a thrilling mystery that evokes the drama and scandal of radio stardom in prewar Chicago.

“An engaging murder mystery set in prewar Chicago.  Radio stars, Dust Bowl refugees, and the shadow of Hitler on the horizon bring the era to life.  I very much enjoyed Cheryl Honigford’s debut novel.  I think you will, too!” – Nancy Atherton, New York Times bestselling author of the Aunt Dimity mysteries

“An accomplished debut. Honigford takes us on an absorbing ride through the world of 1930s Chicago radio, introducing us to a plucky new heroine and an entire cast of outlandish radio stars.” – Anna Lee Huber, national bestselling author of the Lady Darby mysteries

“You’ll thoroughly enjoy this delightful debut mystery that takes you into the highly competitive world of radio in the 1930s, where people will literally kill for a good part! Cheryl Honigford recreates this time period with a delicious attention to detail and populates it with characters you will love… or love to hate!” – Victoria Thompson, bestselling author of Murder in Morningside Heights

“Charlie and Vivian have great chemistry, and readers will want to see the rough detective and society-girl-turned-actress tackle more Windy City cases together. Honigford’s portrayal of prewar American life and his take on cozy crime will appeal to fans of Jill Churchill’s Grace and Favor series and Ron Goulart’s Groucho Marx mysteries.” – Booklist

“Honigford… excels in capturing the flavor of the golden age of radio and Depression-era Chicago. Viv and Charlie make a charming couple as they feud and fight and then discover they have a lot in common. There isn’t quite as much drinking as in Dashiell Hammett’s The Thin Man, but this duo may be the next Nick and Nora Charles.” – Library Journal

“Honigford vividly recreates Chicago during the Depression. The depth of her research and her realistic portrayal of old-time radio transport readers back to its golden age, when listeners gathered around their sets to hear The Shadow, Boston Blackie, or The Thin Man. This is a thrilling adventure laced with humor that keeps readers guessing whodunit until the end” – Historical Novels Review

“…for mystery lovers who like a go-getter heroine and a bit of history with their murder, The Darkness Knows is a promising start to a new series.” – Shelf Awareness

“…Honigford is skilled at painting a vivid picture of Chicago in the late 1930s. Fans of the pre-World War II era will applaud her. This debut novel of a new series is a good start for what promises to be satisfying reading for those who enjoy cozy mysteries and good puzzles.” – NY Journal of Books

“An accomplished debut by Cheryl Honigford who has done great research into the Golden Age of Radio. I see a sequel coming… soon, I hope.” – Fresh Fiction