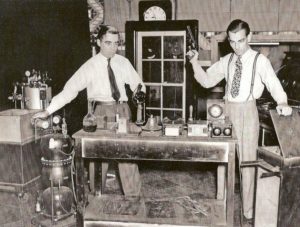 Radio was called “theater of the mind” because the listener had to imagine everything that was happening. That meant, of course, that if was a fight, someone had to make the sound of that fight while the actors performed the dialog.

Take for example, this section from the first chapter of THE DARKNESS KNOWS.

“The well-choreographed struggle began on cue. The organ hummed. The soundman punched a fist into his open palm once, twice while he scuffled his feet through the small tray of gravel in the corner. Graham growled, “Take that!” There was the sound of a single gunshot – a blank fired into the air from a real pistol – then a beat of silence.”

And this is from HOMICIDE FOR THE HOLIDAYS (during a live production of The Scarlet Pimpernel).

“The head soundman opened and closed a metal door on its special stand. It clanged ominously.

Another soundman stood far off in the corner, covering his mouth with his hand to muffle the sound. “Ready!”

The head soundman and his assistant picked the prop muskets off the table and locked them.”

A pause. All was silence in the studio. Vivian looked at Graham, his eyes trained on his script, waiting for the blast. Her eyes flicked to the control room. All were rapt with attention, mouths agape, including the ad man practically on his toes in anticipation.

Then the thunderous sound of rifles firing filled the studio. Vivian flinched, even though they’d been through this scene ad nauseam in the past week.”

Depending on the size and importance of the production there were likely several people at a table off to the side in the studio behind a table full of sound props. They were responsible for anything beyond dialog that was needed for the production: rain, gunshots, doors slamming, footsteps, car engines revving, squealing tires, thunder, wind… use your imagination – the list is endless. Plungers were used to mimic the sound of horse’s hooves slogging through mud. A crackling fire might be made by crinkling cellophane in front of a microphone. Car doors were often the actual doors detached from the car itself and brought into the studio. And believe it or not, real guns were often fired in the studio (as in the excerpt above) to simulate gunshots.

Later on, after recording became popular, they started to use sound effect records for the more unusual or hard to produce sounds.

Here’s a Chevrolet-produced short from 1938 that shows the behind the scenes of how it was done: