Driving back to Chicago this past week by husband mentioned that Al Capone’s final resting place is just a few hundred feet off of the highway on our route home. Al plays a role in Homicide for the Holidays (and a role in my life just by my living in Chicago), so I agreed to stop and have a look. Actually, Mt. Carmel Cemetery on the west side of the city is the final resting place of several infamous locals. And if you’re wondering if Google really does have everything covered then wonder no more, because this map exists, people… 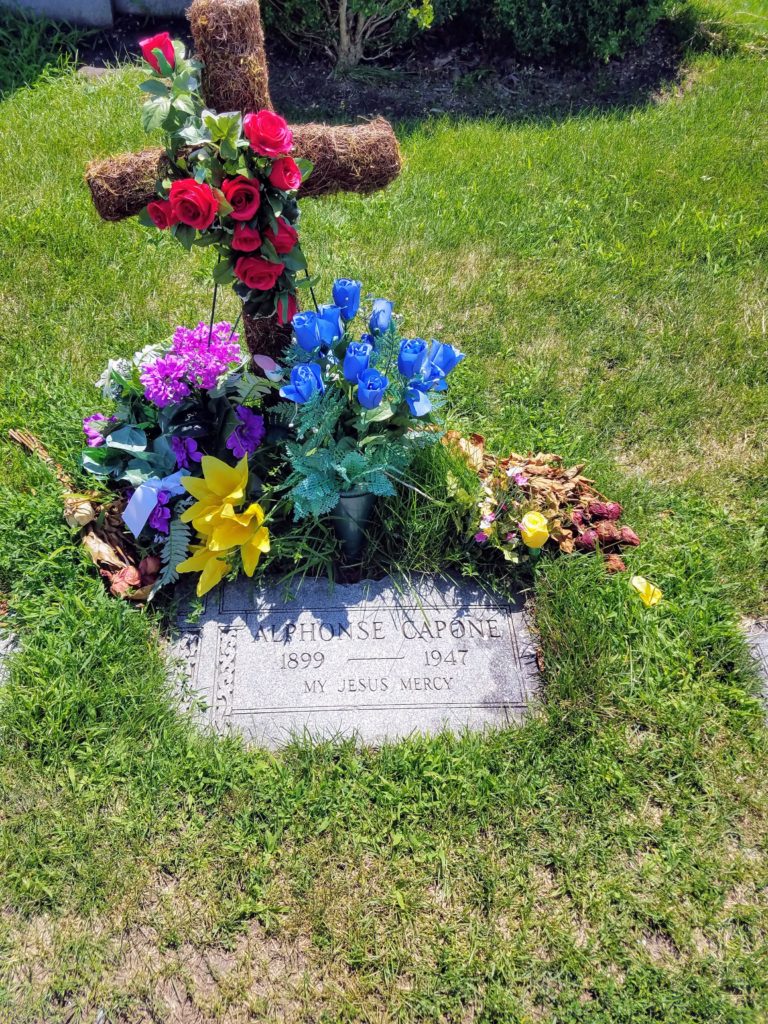 Al’s grave is actually right inside the entrance (along with his brothers Ralph and Frank). As I stepped out to take a closer look (and snap this photo) a white minivan drove by very slowly toward the exit, and I heard the driver hiss/growl in my direction, “He was a MURDERER.” Chicagoans have strong feelings about the man even after all this time. I assume the driver’s intent was to shame me for treating the grave like a tourist destination, but as you can see… I’m not the first. 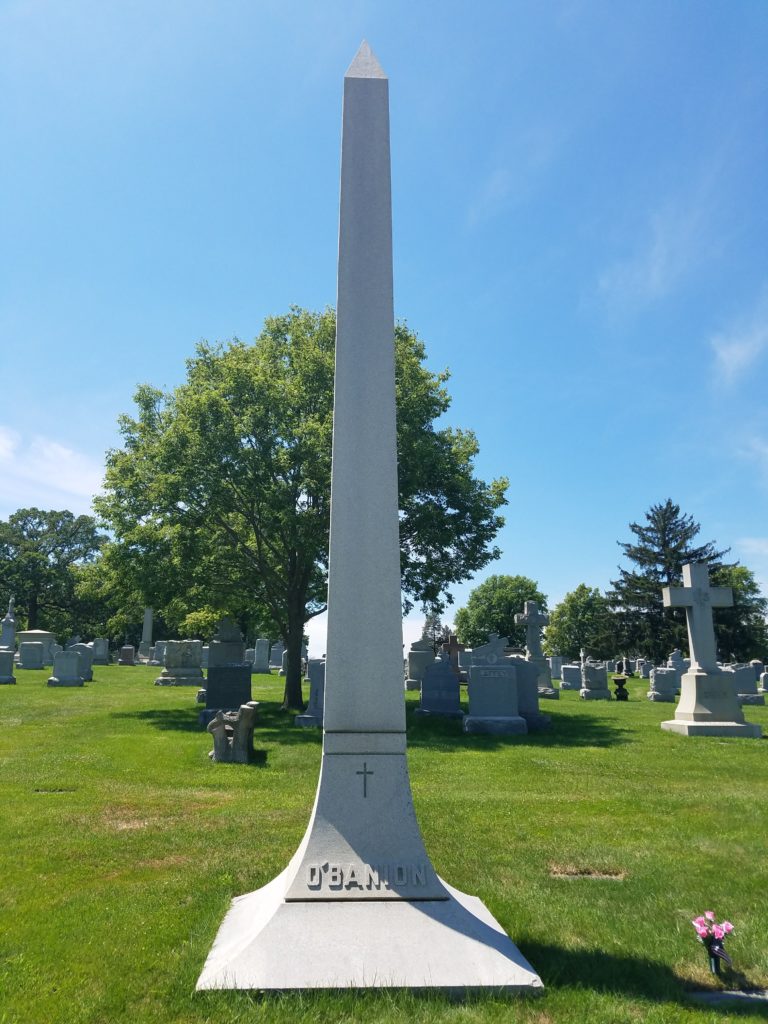 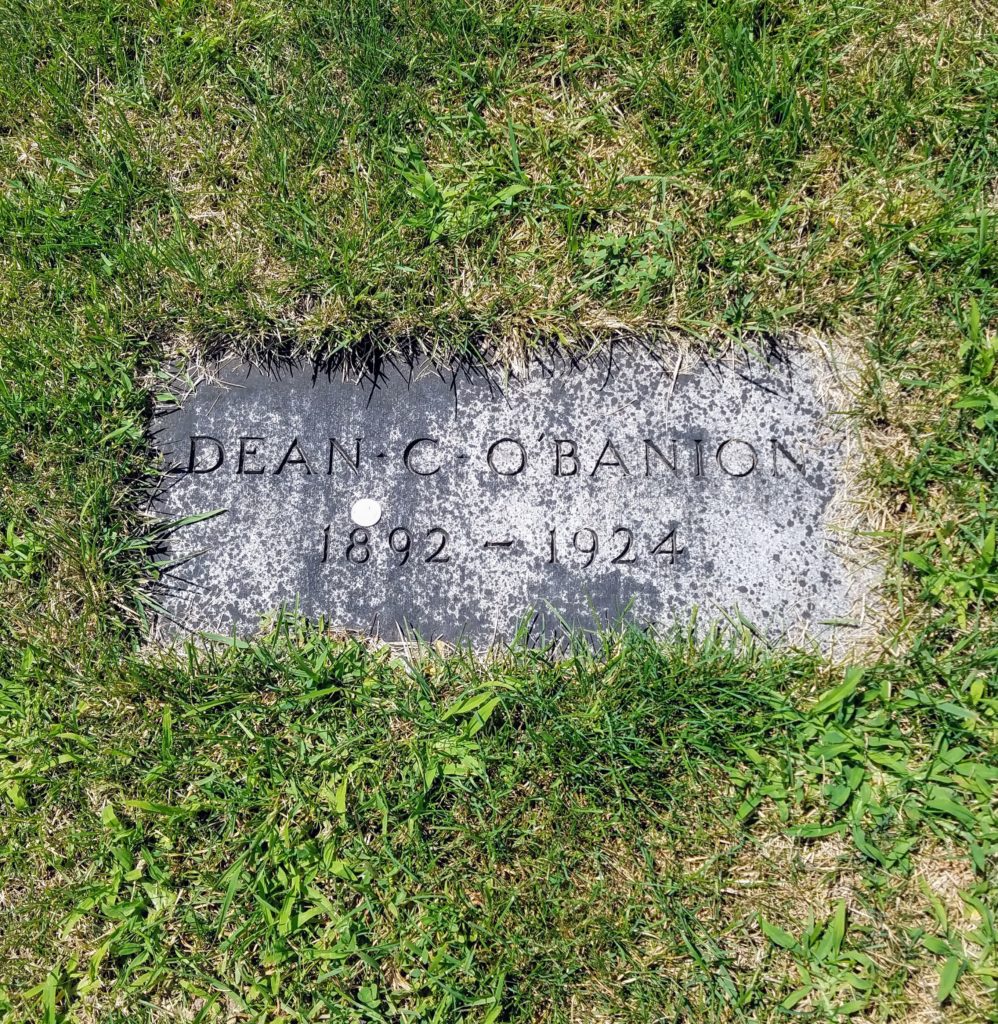 Oddly enough, just down the road are two of the men that Capone has been rumored to have had killed during his reign. (Allegedly, because he’s only suspected of being involved with their murders or ordering their hits. He was never convicted of anything like that in his lifetime – not even arrested.) First is Dean O’Banion, the leader of the north side gang, who was gunned down in his flower shop in November 1924 after crossing Capone’s predecessor as head of the south side gang, Johnny Torrio. Gangster funerals in the early 1920s were massive affairs. Thousands attended O’Banion’s funeral. Why is there a quarter on his grave marker? Good question. I looked it up.* 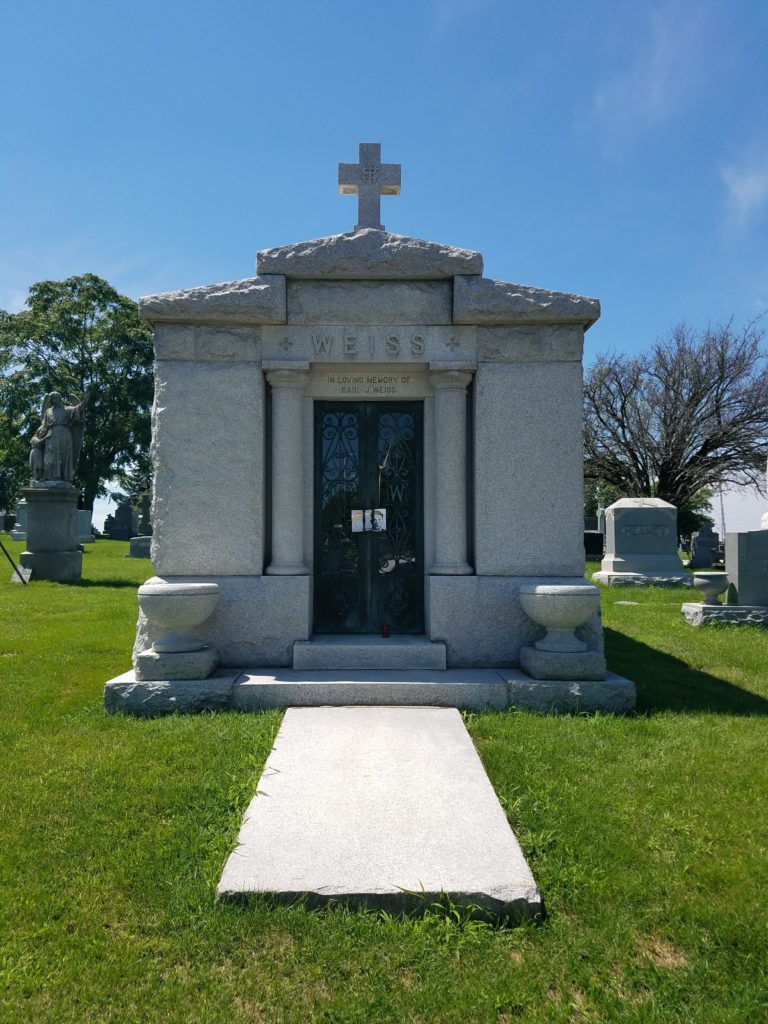 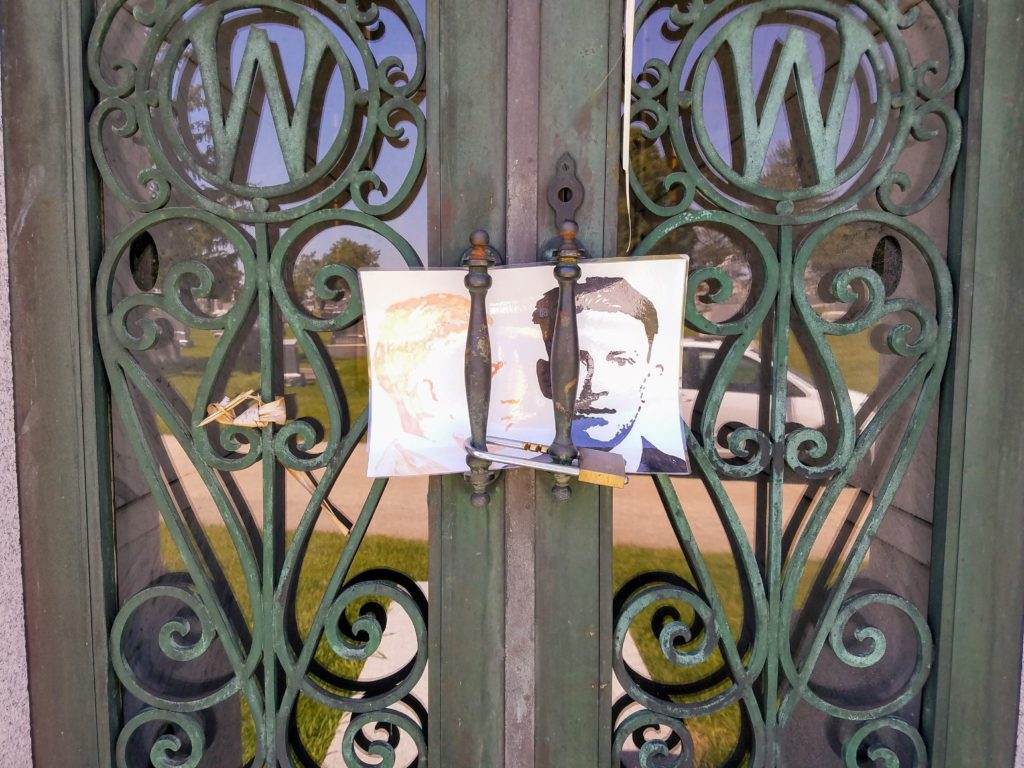 Just a few feet away from O’Banion’s grave is the mausoleum of Hymie Weiss. Hymie (real name Henry Earl J. Wojciechowski) was Dean’s successor as leader of the north side gang. Hymie was a hothead and he didn’t last long. He was gunned down on the street in front of Holy Name Cathedral (and right across from Dean’s murder spot, Schofield’s Flowers) in the fall of 1926. There are supposedly still bullet holes in the stone of the cathedral from the tommy guns. Someone put their artist’s rendering of Hymie’s mugshot in the gate. There are also what look to be dried palm fronds from Palm Sunday.

Another of Dean and Hymie’s associates, Vincent “The Schemer” Drucci, is around the corner, buried in a $10,000 silver casket in his own mausoleum. He was known as a prankster and he made the papers in September 1922 for jumping the gap in the rising Michigan Ave bridge to elude police. But he couldn’t escape the police forever – he was killed in the back of a squad car in April 1927. We drove past the mausoleum and noticed the lovely stained glass window inside, but I didn’t make the connection to him, because the outside bears his real last name, D’Ambrosio. So no picture.

The Bloody Gennas are also buried at Mt. Carmel in elaborate mausoleums located between Capone and O’Banion. (True to their nickname, all met bloody ends related to crime and Capone.) Also interred here is Capone’s hitman “Machine Gun” Jack McGurn (who met his early end in a bowling alley).

If any of this interests you, I highly recommend the book Guns and Roses: The Untold Story of Dean O’Banion, Chicago’s Big Shot Before Al Capone by Rose Keefe. It seems to be out of print, but you might be able to find a copy in the library.

If you still aren’t convinced that Chicago was a crazy place in the 1920s, I present this graphic from the Chicago Tribune (updated daily in 1924) tracking deaths in the city due to Autos, Guns, and Moonshine. This one is from March 14, 1924. 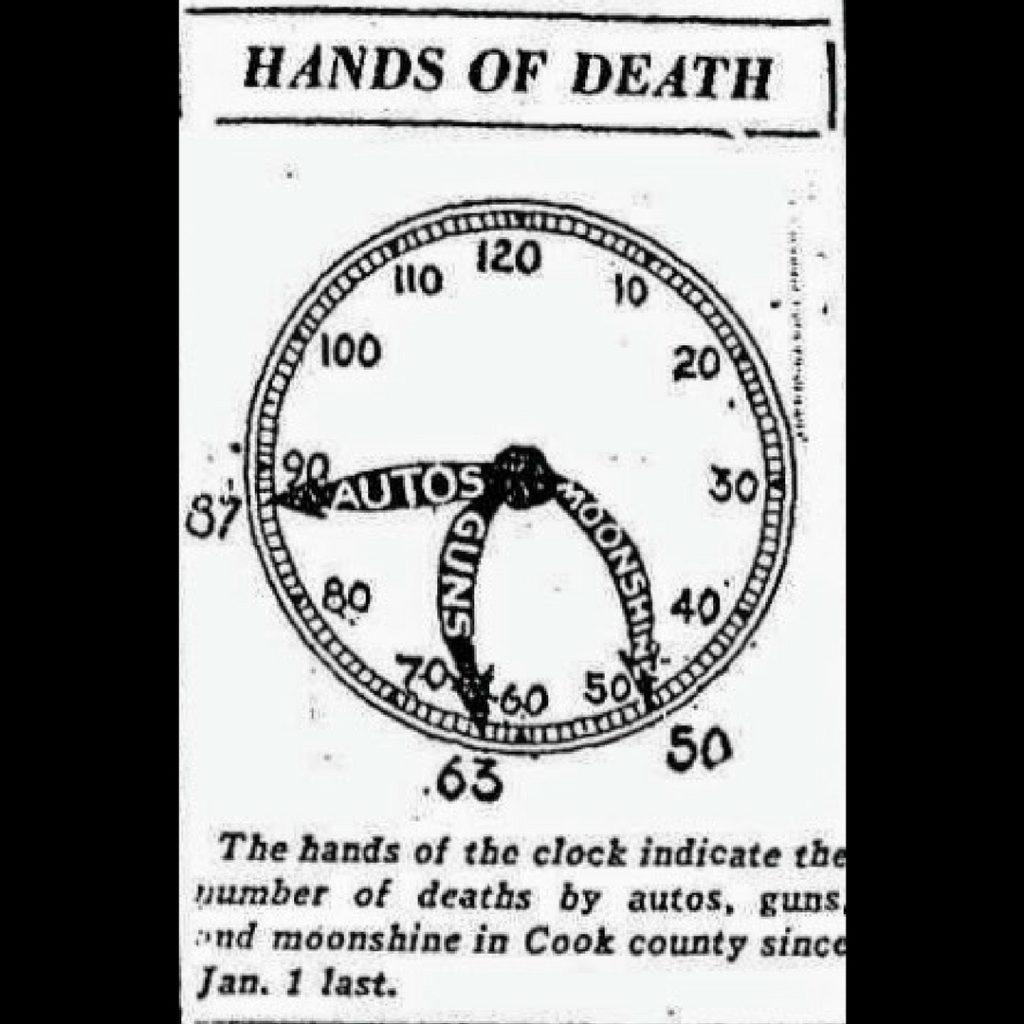 The last “celebrity” I visited is unrelated to crime but she is infamous – in Chicago anyway. Julia Buccola Petta, The Italian Bride, died in childbirth and was buried along with her stillborn son. The legend goes that her mother began having dreams that her daughter was telling her she was still alive. The mother had the body exhumed six years later and Julia’s body appeared to be completely uncorrupted. It was apparently so amazing that they took a picture of it and put on her gravestone after they reburied her and had a statue commissioned of her in her wedding dress. It’s pretty creepy, to be honest. 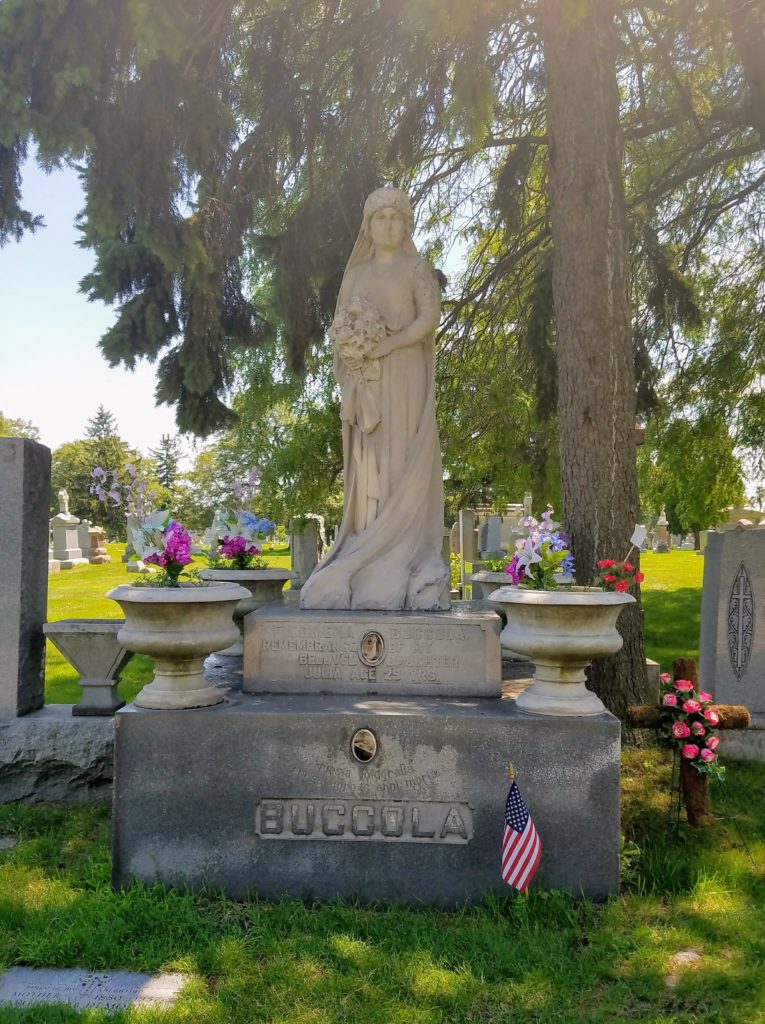 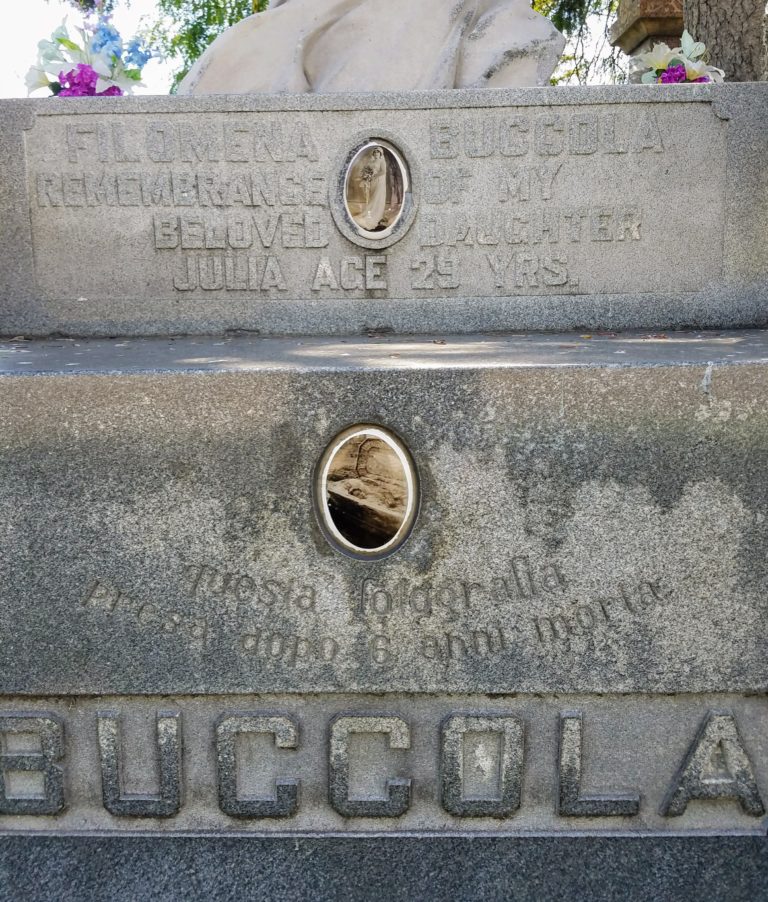 *By leaving a quarter at the grave, you are telling the family that you were with the soldier when he was killed, eh? Dean O’Banion was never in the military and anyone that had been with him at the time of his death would be long dead. A little role playing by someone touring the graves perhaps? People get weird about this stuff – excluding yours truly of course.